The purpose of the Northwest Coast studies was to discover the culture and way of life of the people, past and present.  Students engaged in a role play where they began their quest together and eventually faced critical incidences.  They had to learn to work together and problem solve in order to survive.


Students began by constructing the environment and setting of their home.  They discovered the climate, natural resources and geography of the land.  They also began thinking more deeply about the natural resources and how we will use them to survive.  They thought logically about our basic needs of food, water, clothing and shelter.  Eventually, the families and tribe formed and students decided on their roles as members. 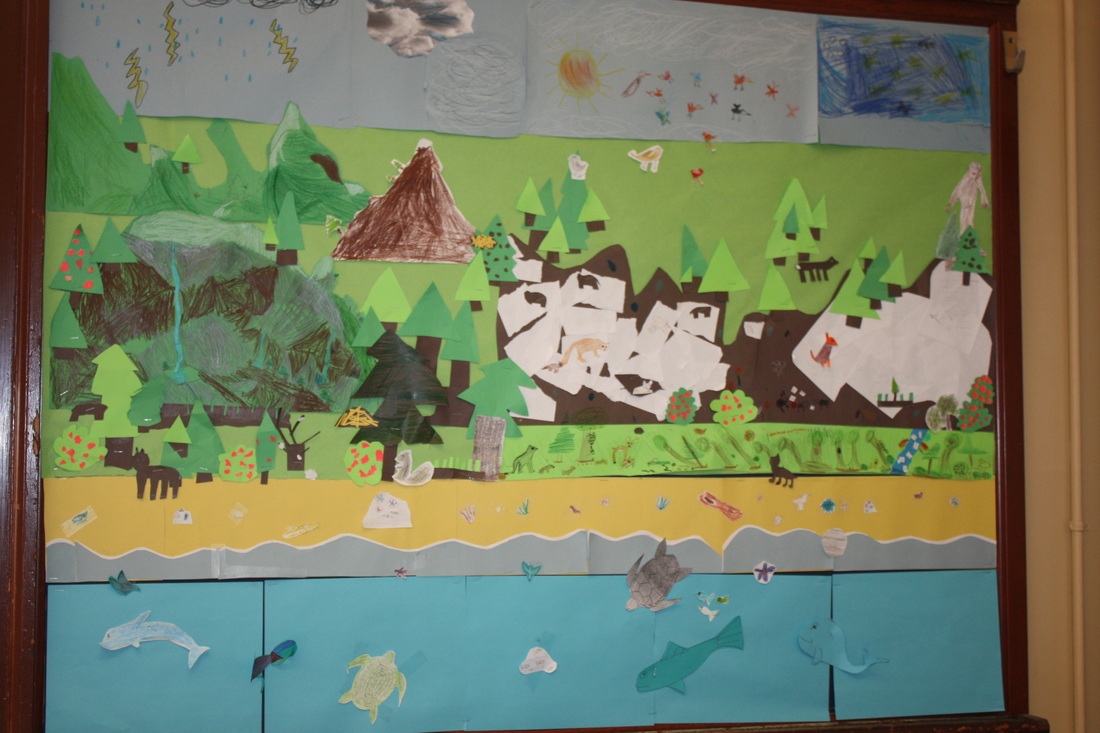 We have a plan for what we will eat!
The villagers have a place to live!  The long houses were constructed for each clan.

Characters
Clans are formed, characters have evolved and now its time to meet the other villagers (see video)!  Students were able to develop their own characters, including gender, age, relation to others in the family, physical characteristics, personality traits, skills, and role in the family.

Leisure Time
Characters are learning about how Northwest Coast People spend their leisure time.  In this video we received a visit from Parisa's father, who studied the North west culture and took up carving as a hobby.  He shared his artwork and allowed students to take turns using the tools!

Students participated in workshops (carving, weaving, storytelling and drawing) to improve on skills to use during leisure time.  They were focused and determined to learn!

More Leisure time
Critical Incident - Traders
During leisure time the villagers noticed a ship on the shore and had to make a quick decision.  The chief chose to greet the ship with his strongest members (hunters).  The rest of the villagers hid children, elderly and food.  Fortunately, the ship was full of traders and came loaded with buttons, bead, hammers and axes.  They wanted to trade for the tribes art (baskets, blankets, carved boxes and totem poles). Each family gave up various pieces of art in exchange.  Then, they figured how to distribute the traded goods to clans. Students then stepped out of character and reflected on the experience by sharing feelings. 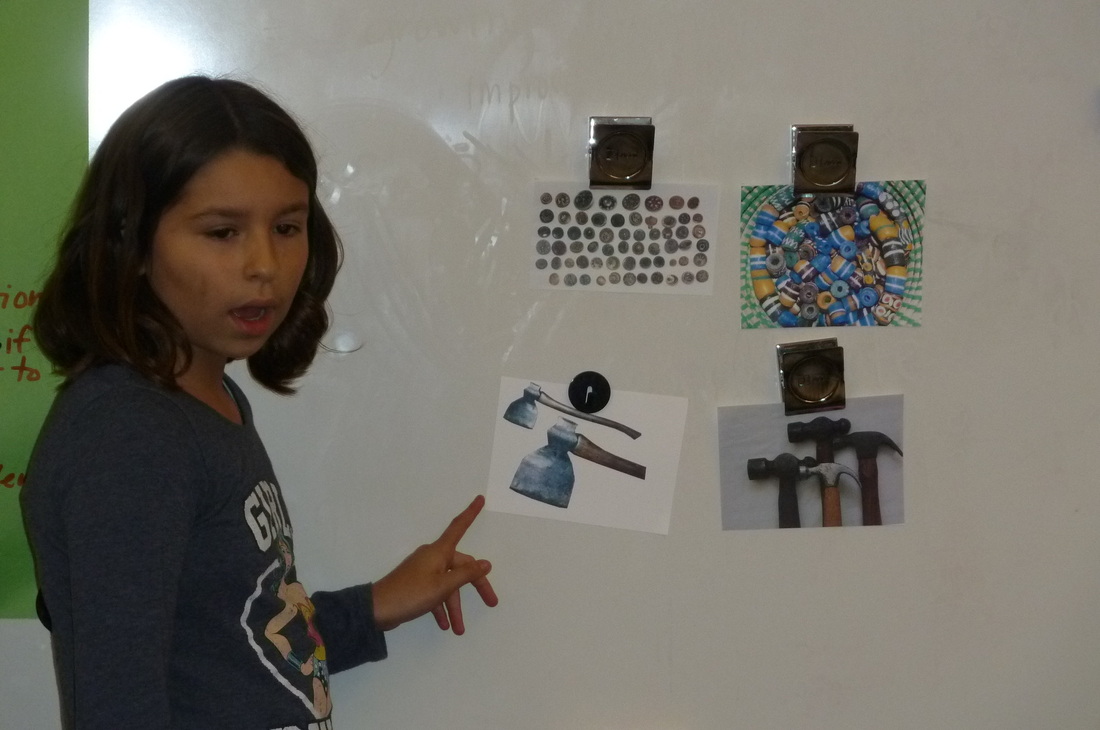 Chief decides how to distribute the items.  The hammers were given to specific clans who had skilled family members.  The axes went to the chief and a community location to be used by all clans (with permission from chief).  The buttons and beads were distributed evenly between clans.
Critical Incident - Settlers 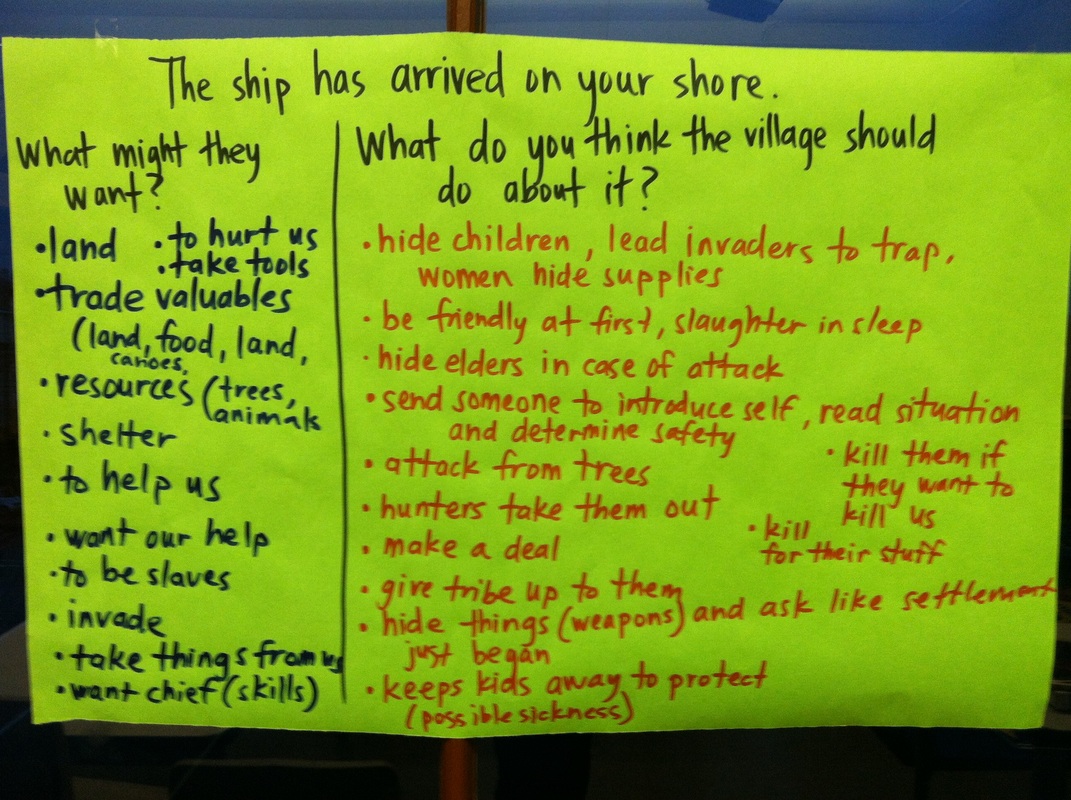 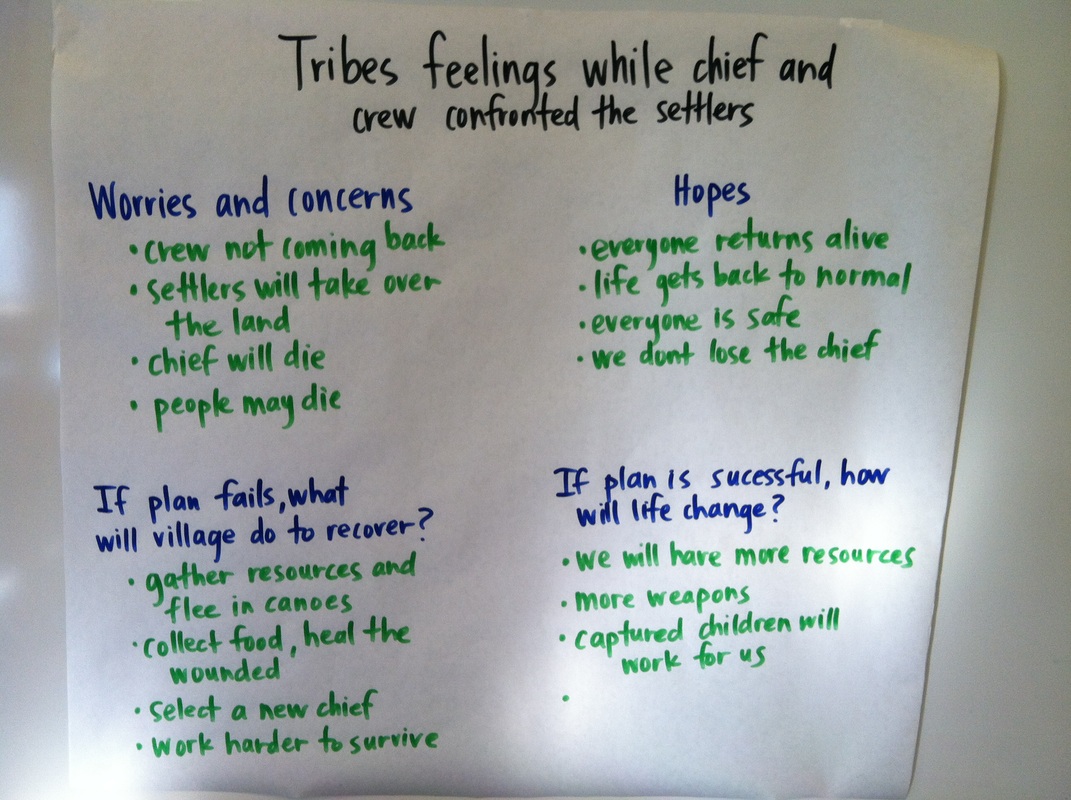 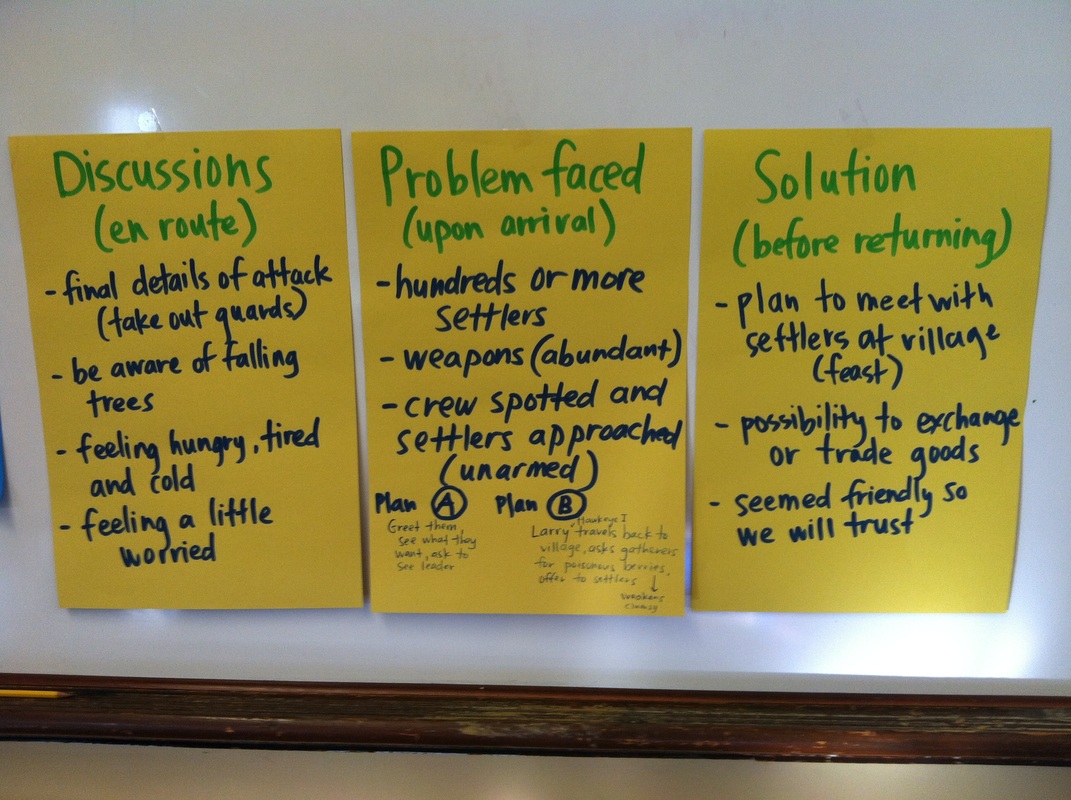 The settlers had a peaceful visit with the settlers.  Ultimately, the settlers agreed to cut less tress and hunt fewer animals in exchange for the expertise of the shamans who can help heal their diseases.  The tribe was satisfied with the feast and proud that they did not follow through with the original plan to attack. The tribe relaxed after the settlers left and participated in leisure time.  Not long after, however, Sir Issac Stevens entered the village and delivered a treaty! 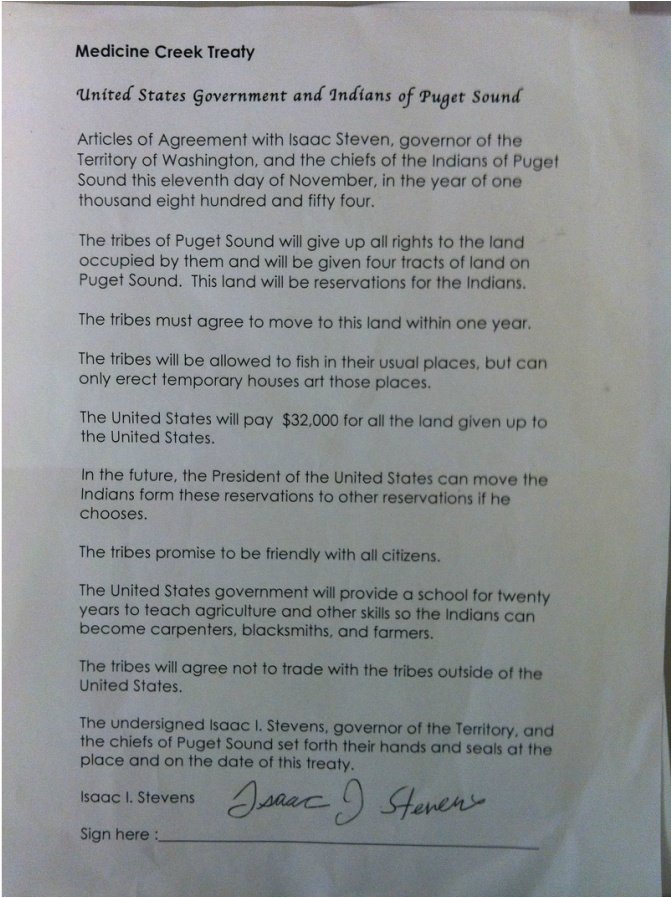 The tribe reacted strongly to the treaty and Chief Bluestar refused to sign it.  Sir Issac Stevens told the chief that he will return in one day and expects that it will be signed at that time.
Relocation to reservation
The treaty ultimately forced the tribe to move to a new land (reservation).   The tribe shared their feelings about the relocation.  Mostly they expressed frustrations, deceit and injustice. 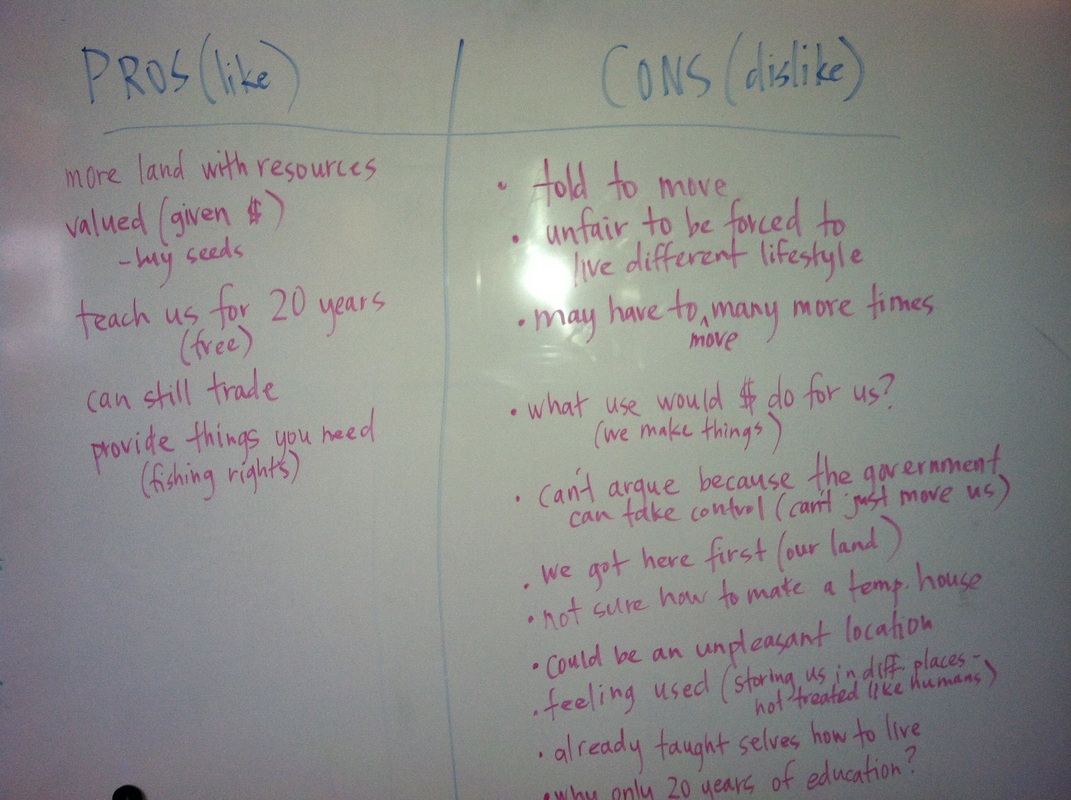 To end the unit, I took students on the journey through a story of threatening challenges (weather, famine, sickness) as they traveled to the reservation.  When the tribe arrived they began to set up their village once again. Students were overwhelmed with the task and reflected on the entire story from their characters perspective.